‘In a gentle way you can shake the world’ said Mahatma Gandhi. The man did manage to shake the world with India’s Independence. Seventy five years ago around this time, our country officials were planning major social, cultural and economic changes for a free and a better India. Have you ever wondered what the economy of India looked like seventy five years ago? This article will walk you through the Indian Economy over the years starting from the Mughal Era to the British rule and the present scenario. If you are as curious as I was, keep reading!

The Mughal Empire commenced from 1526, when Babur won the battle of Panipat against the last sultan emperor Ibrahim Lodi. The empire lasted for around three hundred and thirty one years when the British invaded India. In these three hundred years, the economy of India had reached its peak. The Gross Domestic Product of Mughal India in 1600 AD was estimated at about 24.3% of the world economy which was the second largest economy at that point. Around this time, the Mughals had taken over almost 90 percent of South Asia and imposed uniform customs and tax-administration systems. Under this system, Aurangzeb Alamgir abolished eighty taxes which prevailed until 1659. In compliance with the principles and traditions of Islamic law, ‘Zakht’ was levied on muslims instead of different commercial taxes. Accordingly, Muslims were subjected to pay two and a half percent of their savings, Christians were subjected to pay three percent and Hindus had to pay 5 percent of their savings.

When we talk about the State Revenues under the Mughal Empire as a whole, it is difficult to make any precise assessment of the total income of the state under different rulers due to the varying economic conditions prevailing at that time. However to put the entire tax system during this period under one bracket, it can be said that the tax structure consisted the following:

India’s wealth indeed did sustain more than 100 million people. With plenty of arable land, its agriculture was certainly as productive as Western Europe’s. Consequently, the economy did produce a large financial surplus which was used to support the growing Mughal Empire and finance spectacular monuments like Taj Mahal. 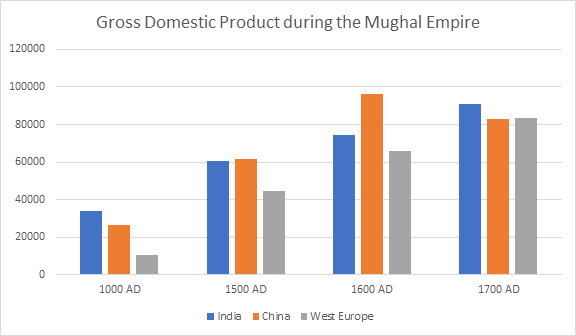 1858, marked the shift of the Indian Economy when the rule of East India company was transferred to the Crown in person of Queen Victoria. Indian Nationalists consider British as the reason for the country’s poverty. From 1757, the political power of the East India Company gradually expanded which resulted in the company using the huge revenue generated by the provinces to buy Indian raw material and spices. This led to the decrease in the continuous  foreign inflow. By 1858, the money accounted in the name of foreign trade had stopped and the ‘British Raj’ had officially begun.

Under the British Rule, two major reforms were made to collect tax revenue. The first being the Ryotwari system followed by the Mahalwari System. The tax rates under the Ryotwari system were as high as 50% for dry land and 60% in wet and irrigated lands which were payable directly to the government. The cultivators had to compulsorily pay the taxes in cash. The farmers now focused on growing cash crops instead of food crops which led to the scarcity of food crops.

In the 18th century, India had 22.6% of the world’s GDP and was the leading manufacturing economy, globally. Over time, the Indian entrepreneurs began setting up their own textile mills and slowly recaptured the domestic market. By 1896, Indian mills produced 8% of the total cloth consumed in India which gradually increased to 76% by 1945. Therefore, by 1947 Indian entrepreneurs were in a strong position to buy out the businesses of the departing british. With this, the British Rule came to an end and new economic policies for a free India were drafted. According to British economist Angus Maddison, India’s share of the world income went from 27% in 1700 AD to 3% in 1950.

Ever since Independence, India has grown as a planned economy.  India now has a very well structured economy divided into three main sectors- agriculture, industry and services. Agriculture, initially comprising 51.6% of the total GDP now comprises around 16% and services that initially comprised 30% now increased to 60%. All three sectors have seen massive changes over the years some of them being delicensing, tariff reductions and FDI cap relaxations, liberalisation and globalisation in 1991. India has truly emerged as the fastest growing major economy in the world and is expected to be one of the top three economic powers over the next 10-15 years. To sum it all, ‘Slow progress is better than no progress’ the growth of the Indian Economy is indeed commendable but the journey doesn’t end here. There still are milestones to achieve. With this I would again like to quote the father of our nation, “Live as if you were to die tomorrow, learn as if you were to live forever.” The country still has a lot to learn and we hope for a better tomorrow.